To restore Mahoe Reserve to a healthy indigenous ecosystem, highly valued by the community.

The project started in 2002 by year 9 students at Lincoln High School.  In 2003, planting began and since then, dedicated community members, including schools, kindergartens and other local groups have planted more than 7000 native trees, shrubs and grasses.  The Reserve is managed by the Mahoe Management Committee which has members from the local community and is overseen by the Lincoln Envirotown Trust.  The committee administers the funding provided by the Selwyn District Council which goes towards the upkeep of the Reserve, raises money for plants, and organises monthly working bees for planting, weeding and mulching.  We have Lincoln University and Manaaki Whenua – Landcare Research ecologists as advisors.  We have many volunteers from the local community as well as Lincoln University and Lincoln High School students.  We also have a number of volunteers who come from overseas and help us while they are in New Zealand.

Monthly working bees held on the first Sunday of every month from 2pm.

Lincoln Township and the Selwyn District were once covered in native scrub, wetlands and forest vegetation including cabbage trees, tutu, and toe toe, flax, raupo, kahikatea, matai, and totara, ake ake, and various sedges. The shingle at Mahoe Reserve dates back a thousand years when the Waimakariri River flowed through Lincoln. All changed around 700 years ago as fires destroyed the vegetation, followed by agricultural practices and permanent settlements 150 years ago. This brought felling of native trees and the drainage of natural wetlands.

Over the last few hundred years, a significant ecological disturbance occurred causing unprecedented losses of native biodiversity as a consequence of habitat degradation. This habitat loss for invertebrates, birds and lizards has resulted in local, or in some cases, complete extinction of species. 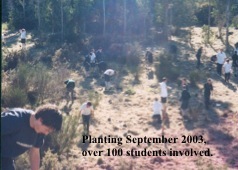 Several ecological restoration projects in the Selwyn District are attempting to return the land back to its natural state. Collectively, these projects work towards the vision of the Te Ara Käkäriki Greenway Canterbury to build a corridor of native vegetation from the mountains to the sea through the Selwyn District. This will provide avenues for dispersal for birds, lizards and invertebrates. The Mahoe Reserve, a community driven ecological restoration project at Lincoln, aims to provide native habitat and food source for native fauna.

Students at Lincoln High School were looking for a location to extend their restoration work, and this is where the Mahoe Reserve began. Thanks to the support of students, teachers and the community for help at planting days and financial assistance, the Reserve has taken shape. The support of the Selwyn District Council and other business sponsors is greatly appreciated.

From this community participation in the reserve, a wider vision was born. Lincoln High School became an enviro school and Sue Jarvis, recipient of the Sir Peter Blake Environmental Educators’ award, and Ian Spellerberg, from Lincoln University, initiated the idea of an ‘enviro town’ and the Lincoln Envirotown Trust was established in 2006. The trust is made up of members of the community including Lincoln High School students.

The Mahoe Reserve was named by the Lincoln High School students after a small tree that would have grown under the larger canopy trees of the lowland forest. The information gathered from burnt logs buried in the shingle and pollen analysis has provided a picture of what plants were present before the arrival of humans to New Zealand. The pit itself was formed from the extraction of shingle used for roads and railway projects. It was also used as an illegal refuse site and was leased by the Lincoln Golf Club for a possible extension.

The Mahoe Reserve is located on Boundary Road, opposite Lincoln High School

There are regular working bee’s at the Mahoe Reserve on the first Sunday of every month starting at 2pm.