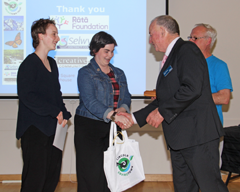 Nineteen films were submitted for this year’s Environmental Film Competition run by Lincoln Envirotown Trust. This marked a substantial increase over previous years and it is to be hoped that it is indicative of people’s concerns about our environment, a willingness to articulate these, and to suggest actions.

A particularly pleasing feature of entries this year was that there were no less than 5 independent entries by adult producers alongside the assorted school age group and individual entries. As the Acting Mayor of Selwyn Councillor John Morten pointed out at the Awards Evening, the number of varied entries greatly enhanced the contest but left the judges with a very difficult task indeed.

All the films were viewed at a fun filled evening and all producers and actors received recognition for the work they had put in and the contribution they had made. Special prizes went to the category winners:

Preschool won by Kidsfirst Lincoln who showed us all the work they were doing to keep the Liffey clean enough for eels.

Primary School won by Springfield who detailed their amazing efforts to plant natives at their school, including a request to the local fire brigade to come and water them!

The adult producer Monika Rastoggi won her category with an excellent instructional film on how simple everyday routines can be adapted to give more sustainable living.

Lincoln High School students Lexi Richards and Libby Duncan won the overall KEA TROPHY for their humorous instructional film on how to create beeswax wraps for use in place of cling film.

Lincoln Envirotown would like to thank the following who sponsored the prizes; Rolleston Square, Enviro-Mark Solutions, and the Warehouse Rolleston.